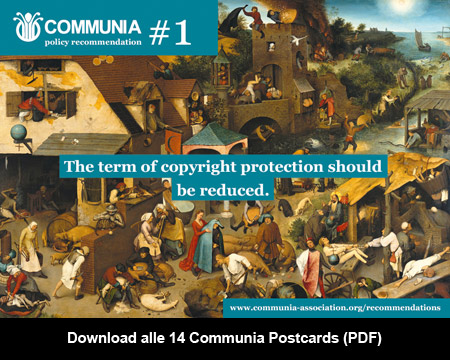 Between 2007 and 2011, COMMUNIA was financed by the European Commission as part of the eContentplus Framework and had over 50 members. In addition to Kennisland, Waag Society, the Institution for Information Law and the Netherlands Institution for Sound and Vision also belonged to the COMMUNIA network. COMMUNIA was coordinated by the Nexa Research Centre for Internet and Society in Turin.

During the project period, Kennisland delivered a significant contribution to the activities of COMMUNIA. In October 2008, Kennisland organised a two-day COMMUNIA workshop in Pakhuis de Zwijger in Amsterdam focusing on the marking of public domain works. This workshop also served as the starting point for the development of the public domain tools of Creative Commons: the CC0 waiver for relinquishing copyrights (used by rijksoverheid.nl, data.overheid.nl and europeana.eu) and the public domain mark (used by europeana.eu and commons.wikimedia.org). Kennisland and COMMUNIA were present at the outset with respect to key parts of the infrastructure of the open data and open content movement.

One of the most important achievements of COMMUNIA is the Public Domain Manifesto, which was published in 2009. Paul Keller and Lucie Guibault (IVIR) are the principal authors of this manifesto that has since been signed by thousands of individuals and institutions. The manifesto describes the contours of the public domain in the digital era and formulates several principles and recommendations to preserve the public domain. The Public Domain Manifesto has received considerable attention and Europeana has incorporated key parts thereof in its Public Domain Charter.

This text has a Creative Commons Attribution License (CC BY) and has been copied from the Kennisland website. For a full version with images, streamers and notes go to https://www.kl.nl/en/projects/communia-network/