Raising the flag on a big mess

Recently, the Association of Dutch Municipalities (VNG or Vereniging van Nederlandse Gemeenten) got into a jubilant mood when they declared the execution of the Decentralisation Act ‘on schedule’, in an article in Dutch newspaper de Volkskrant, that headlined ‘Municipalities on schedule with new responsibilities’, subbed by an optimistic ‘Fear of big mess unjustified’. A lot of information in one sentence, which assumes quite a bit of prior knowledge on the topic.

Most striking are the words ‘Fear of big mess’, that would spell trouble if they weren’t rendered harmless by the following ‘unjustified’. Reassuring! I will first briefly summarise where the anxiety comes from, and then place the VNG’s reassurance, which led me to write this, in perspective.

Reckless
As of January 1st, 2015 the transition of tasks in the social domain from the national government to municipalities must be completed. Changes in the Participation Act, the decentralisation of parts of the Exceptional Medical Expenses Act (or AWBZ in Dutch) to the Social Support Act (Wmo in Dutch) and youth care, mean drastic changes in municipal policy and its implementation.

The fact that this big transition leads to unrest is not so strange. Those informed are in fact not unconcerned either. In May of this year, the Algemene Rekenkamer (the Court of Audit) came with the urgent recommendation that the government should test their plans for feasibility, allowing room for adjustments when needed. There is still much uncertainty about this mega operation, is the concern of the Court. So pre-testing is needed. But, according to the Court’s director Saska Stuiveling, responsible Minister Plasterk (Internal Affairs) doesn’t feel like going up that avenue. Volkskrant columnist Sheila Sitalsing called that ‘Reckless’ in her May 23rd column. A word well chosen, I believe.

Everything under control (at least on paper)
The VNG’s task to help execute this reckless design should not be underestimated. Given the task at hand is so ponderous, I question the ease with which VNG director Jantine Kriens gives the ‘all clear’ signal. Some striking statements from the article:

And who are meant by ‘citizens’ and what exactly are those ‘improvements’? Generally questions which cannot be answered from behind a desk. You will need to get to know the needs and demands of ‘the citizen’ and for answers to what might be ‘vast improvements’, you will have to dig deeper and get in contact with the person who is at stake. In addition, you must distinguish formal (professional) and informal (voluntary, community-generated) care. And pay attention to other factors, such as housing, that have direct and indirect impact on care needs.

What’s been ‘taken care of’?
The view that the concerns are unwarranted creates the impression that the Decentralisation Act is a paper exercise: if only things are correct on paper and at the administrative level, then we are settled and, therefore, there is no reason to be concerned. However, you cannot speak of improved care for citizens, because there is no real, on-the-ground experience yet with how these decentralisations act out in practice. The operation is already called a success even before it has started. That tells us something about how success is defined (in advance!) and measured. If this is also the yardstick the government will use to determine whether the operation is ‘on track’, and lets its control over the social domain expire in favor of the municipalities on January 1, I hereby predict that the ‘fear of [a] big mess’ with which I began, will be justified.

Whereas the National Audit Agency made a strong (but regrettably unsuccessful) plea for a ‘pre-test’, we advocate for room for experimentation: prototype the operation with all of its practical embodiments, beforehand and include all stakeholders (including citizens!) in the process. By doing small-scale trial runs you get a feeling for the new role of the government, professionals, and the possibly renewed expectations and demands of citizens vis-à-vis services in the social domain. With this in mind, we started a project (a ‘social lab’) in the Amsterdam neighborhood Amsteldorp and we will soon start one in Dordrecht. This, moreover, with support from the VNG. Success on paper won’t help a single citizen forward. We need to make things work in practice!

Fear may be a bad advisor, recklessness is culpable.

This is a translation of an originally Dutch article I wrote for de Volkskrant and was published September 22 (and on their website here). The original text is right here. 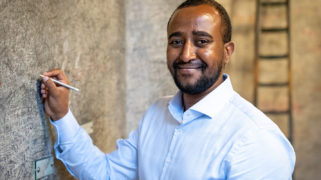 Ephrem Baraki Tesfay is one of the pioneers in Leven Lang Leven (Living a Whole Life). With his project Tale Talk, he was able to acquire a spot in Kennisland’s pioneer program that supports social innovators further developing their innovation for elderly care. Besides Ephrem being an inspired social entrepreneur, he is also a doctor and a scholar with ambitious ideas about reforming our healthcare system. In this article he shares his thoughts on elderly care both here and in Africa.
Read more

This text has a Creative Commons Attribution License (CC BY) and has been copied from the Kennisland website. For a full version with images, streamers and notes go to https://www.kl.nl/en/opinion/de-angst-voor-puinhoop-wel-terecht/