Citizens, community organisations and entrepreneurs increasingly initiate projects that are geared towards improving their city or neighbourhood. While at the same time the government is cutting budgets and scaling down. As a result, the funding of civic projects is at stake. Through crowdfunding platform Voor je Buurt, Kennisland responds to these developments. As one of the first organisations worldwide we prove crowdfunding of local civic projects to be successful.

Thanks to Voor je Buurt, initiators can raise funds by use of their entrepreneurial and networking skills. Crowdfunding is not just an online tool to raise money, volunteers and materials, but also a way to build a community around a project. Contributing to a project results in shared ownership of the project, and we notice that financial supporters often stay involved. As such, the process of crowdfunding makes transparent what happens on a local level, whether there is support for new ideas, and what funding sources are possible.

Since Voor je Buurt was launched in 2013, a multitude of projects has been realised in cooperation with the platform. SomeCrowdfunding is not just an online tool to raise money, volunteers and materials, but also a way to build a community around a project. of the most outstanding examples are the organisation of a marathon in Amsterdam, the realisation of a neighbourhood campside, the music festival KanaalPOP in Groningen and the initiation of a bee house. 80% of the crowdfunding campaigns on the Voor je Buurt platform are successfully funded, and an average of 100 supporters contribute to each campaign.

Kennisland founded Voor je Buurt in 2012 as a pilot project in cooperation with Network Democracy and other partners. The website was launched in 2013 and built up successfully within Kennisland. Since January 1st 2015 Voor je Buurt is an independent organisation. You can contact Voor je Buurt through www.voorjebuurt.nl and info@voorjebuurt.nl. 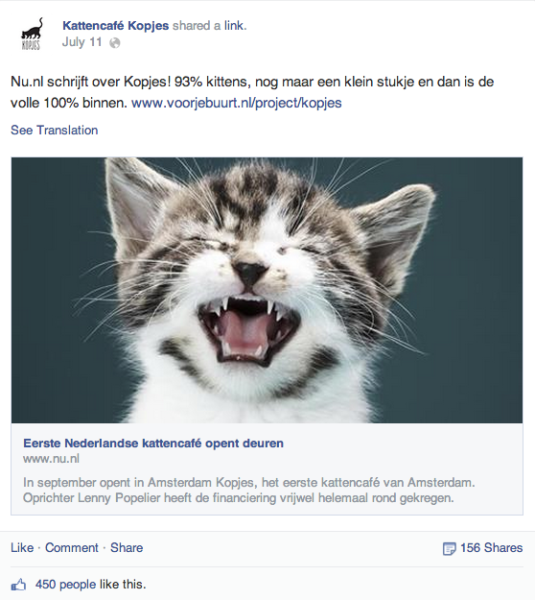 After the successful crowdfunding of Kopjes (Little cat heads) via Voor je Buurt, Amsterdam has the first cat café in the Netherlands. Here you can drink coffee in the company of 10 cats living in the café. A record number of 975 supporters participated in the crowdfunding campaign. Lenny crowdfunded a whopping 32715 euro for her cat café!

Even if you don't like cats, Voor je Buurt is THE crowdfunding platform for local initiatives. From city farm to outdoor hotel, from internship market to splashmob, from food festival to neighbourhood bus service and from fashion roulette to philosophical café: if it is all realised through crowdfunding via Voor je Buurt!

This text has a Creative Commons Attribution License (CC BY) and has been copied from the Kennisland website. For a full version with images, streamers and notes go to https://www.kl.nl/en/cases/crowdfunding-als-antwoord-op-terugtrekkende-overheid/