Slimmernetwerk provides an answer to the lack of room for bottom-up innovation within government, unnecessarily high hierarchical barriers and fragmented governmental responsibilities. Slimmernetwerk++PartnersKafkabrigade, TNO and the Ministry of the Interior and Kingdom Relations (IKR). attempts to break through the compartmentalised, drawing board mentality of many change programmes by organising innovation differently: from the ground up and in networks, through small-scale experiments, with tried and tested methods of innovation and smarter collaboration between organisations.

The showpiece of Slimmernetwerk is the Doetank (Do-tank) methodology: an approach in which small teams of professionals search for solutions to problems that they themselves raise. They receive guidance in doing so from a coach who guides the Do-tank throughout all phases and who helps the participants discover new ways of working through doing.

After four years, thirty Do-tanks, hundreds of LinkedIn discussions++LinkedIn groupThe Slimmernetwerk LinkedIn group has more than 4000 members. In addition, we are very active in maintaining contact with other networks. LinkedIn is an excellent place to obtain free information about your problem area by asking the right question. and many hundreds of commissions, we are now processing the results and insights and making them publicly available to other initiatives within the realm of public administration working on renewal and the innovative capacity of professionals.

Connecting professionals in a network structure

Slimmernetwerk is primarily concerned with problems transcending organisational boundaries. A network with online and offline activities offers Slimmernetwerk members the opportunity to quickly share knowledge and experience with those outside their own organisation. Professionals can initiate discussions in the large LinkedIn group in order to discover efficiently what their colleagues already know. Physical meeting places such as the Slimmernetwerk Café offer Slimmernetwerk professionals a platform to discuss and share what is already happening and has already been done in relation to a particular problem.

Bringing together interdisciplinary teams of professionals and citizens++Co-creationThrough the years, co-creation with citizens has gained a crucial role in the Do-tanks. Actively involving people in formulating the problem and experimenting with solutions increases the chance that your solution will also catch on with your target group. in their own area of practice makes it easier to quickly obtain a clear picture of the various viewpoints from which the problem can be seen. This knowledge allows experiments to be designed for issues that connect with the needs and abilities of those involved. A good example is the Kennisbehoud (Knowledge Preservation) Do-tank, which began as a question on LinkedIn about the steps taken by organisations to preserve knowledgeSlimmernetwerk offers physical and virtual meeting places that provide professionals with a platform to discuss what is already happening and has already been in done in relation to a problem. in the face of the threat of large groups of employees leaving the public sector. A group of more than ten organisations eventually came together to tackle this problem with each other.

Do-tanks bring about change through doing. Working in a Do-tank means gathering knowledge about a problem through both desk research and fieldwork. The Do-tank then proceeds as rapidly as possible to a small-scale experiment. In these experiments participants employ prototyping techniques and receive support from social designers who, step by step, help to visualise the lessons learned. By connecting a problem as rapidly as possible to a concrete situation in practice, the Do-tank gains an environment in which to try out new solutions for real.

The Do-tank then translates the lessons learned from these experiments into recommendations for large-scale change. The network and the Slimmernetwerk website++Slimmernetwerk.nlThe website (Dutch only) is the home base of the Do-tanks and features reports from the Cafés and an extensive inspiration database with examples of and publications about innovation in government. provide an important supporting role in this regard. By starting small and by experimenting, the Do-tank gains a clear picture of what works and what doesn’t. For example, the Do-tank Slim Innen (Smart Debt Collection) of police officer Bennie Beuvink could see, on the basis of the story told by one woman, that inadequate collaboration between the national debt collection agency and local debt assistance services leads to distressing situations for families and unnecessarily high costs for government.

Sharing what works and what doesn’t

WheneverWorking in a Do-tank means gathering knowledge about a problem through both desk research and fieldwork. The Do-tank then proceeds as rapidly as possible to a small-scale experiment. experimentation occurs, things don’t always work out. We often forget to share the lessons learned from these failures. The Slimmernetwerk website is structured in such a way that visitors see not just inspiring examples and successes but also projects that didn’t work out. We devote a lot of attention, particularly in the Do-tanks, to describing the process. Mini-blogs written by participants, short reports by the coaches and film clips give an open view of the intermediate steps taken by the Do-tanks and the things they have had to consider. This is also the case where the innovation devised by the Do-tank proves unsuccessful in the end.

We also improve the network in the same way. We reflect several times per year on what works and what doesn’t. We publish these lessons once per year so that other networks can make use of them. We then change the things that can be done better. The physical meetings, the Slimmernetwerk Cafés and the Do-tanks in particular have undergone significant changes during recent years. At the end of 2014, we will publish all the lessons learned from the Do-tanks during the last three years.

The Slimmernetwerk LinkedIn group has more than 4000 members. In addition, we are very active in maintaining contact with other networks. LinkedIn is an excellent place to obtain free information about your problem area by asking the right question. 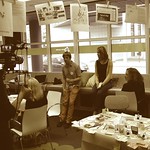 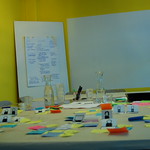 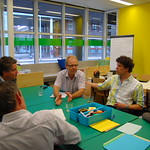 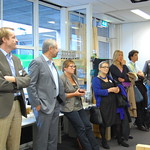 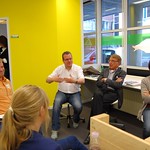 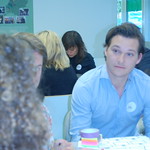 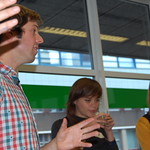 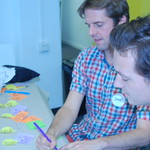 This text has a Creative Commons Attribution License (CC BY) and has been copied from the Kennisland website. For a full version with images, streamers and notes go to https://www.kl.nl/en/cases/kennis-en-draagvlak-voor-innovatie-van-onderop-bij-de-overheid/