The future shape of civic crowdfunding

Crowdfunding has grown tremendously in the last couple of years. From 3D doodle pens, (board)games and iPhone covers to music; everything is being crowdfunded. Kickstarter is often hailed as the great innovator in this respect. Since their start in 2009 they have raised over $724 million for more than 45.000 creative projects. Since Kickstarter’s success other ways of crowdfunding have been researched. At Kennisland we are experimenting with civic crowdfunding through the platform Voor je Buurt (literally: For Your Neighbourhood). Twintangibles, a social technology research firm, recently published a paper on civic crowdfunding. Interestingly, they propose a different form of crowdfunding than Voor je Buurt’s.

What is civic crowdfunding?

Civic crowdfunding differs from regular (donation based) crowdfunding in scope, geographical location and purpose. It only entails projects which are neighbourhood or municipality oriented, such as a new football tournament, barbecue contest or a group of volunteers that does good deeds around the village in a tuk-tuk. They involve a specific location and therefore population, which means that a limited amount of people are interested in the crowdfunding initiative. Also, different from normal crowdfunding, the greater goal of civic crowdfunding is not the money raised; it is the fact that people in the neighbourhoods come together by creating the project. Online civic crowdfunding eventually needs to become an offline close-knit community. This is what Voor je Buurt tries to do, and is also what Twintangibles suggests:

“Online communities gain a new life going offline: online cooperation allows for the creation and development of strong relations that can go up a level if they transfer to an offline environment. These dynamics are only possible within limited geographical boundaries.”

The issue with civic crowdfunding

One of the bigger issues with civic crowdfunding is not the lack of good feasible ideas of active citizens for their neighbourhood, it is the issue of governance. The municipalities have a responsibility to safeguard the community. While online communities can do whatever they please, when you take an idea offline there are rules and regulations to follow. This is only natural. If you want to crowdfund a children’s playground, the quality of the climbing rack needs to be inspected to prevent children from becoming injured. This is why the Twintangibles suggests a more checked version of civic crowdfunding. As you can see in the image below, they first have a crowdsourcing session for good ideas and then they check the rules and regulations. Afterwards people vote for which projects they would like to crowdfund and lastly, the actual crowdfunding (or -lending) process begins. 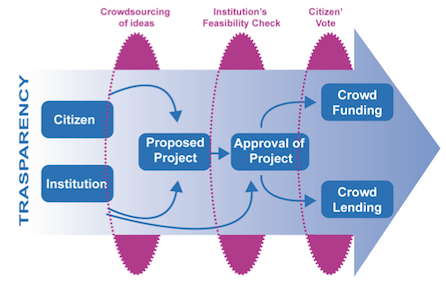 This is a logical system based on dealing with the governance issue. Why bother starting a crowdfunding campaign when we are not sure whether the appropriate permits are available? However, it does seem to take the long route to what we actually want: the transference from online to offline community. This usually occurs during or even after the crowdfunding process.

Ideally, we would have a completely different system. A shorter and more transparent one than the proposal above. This will require a change for both the municipalities and the citizens. If we want less regulations within civic projects, we will need a higher level of trust from the municipality, and more neighbourhood-minded citizens.

When we assume that if a citizen actively contributes to an initiative, he/she will be more eager to check up on its development, as well as critique the quality of execution, the ‘check’ of the municipality is in most cases superfluous. Why would a governmental committee have to vote about a mural in the playground? If enough people like it, they will give money or time to the campaign; if not, the mural will not be made. If the quality of the work is below par, the citizens that contributed to the campaign will take matter to the project leader, or perhaps to the artist. All of this does not require government oversight or spending.

Furthermore, the aspect of the Twintangibles model that requires ‘voting before crowdfunding’ overcomplicates the matter. People will vote directly by either contributing to the crowdfunding campaign, or not. Involving more people in the developmental stage of the project, however, is very valuable. This is where initial contact is made between citizens and makes sure all of them involved feel a responsibility towards the project. This can be done online as well as offline. There is no voting required, just a conversation.

The system we have on Voor je Buurt is shorter than the proposed (no voting), and leans on the idea that citizens check up on their own projects. However, permits are still necessary.This process takes place off-website and before the initiative goes online. One could argue for a system where a permit is automatically given once the crowdfunding campaign is a success.

The future of civic crowdfunding lies not in extending the process, it lies in making citizens more aware of their surroundings and giving them a voice in the discussion on local issues. A bottom-up approach of dealing with the neighbourhood.

This text has a Creative Commons Attribution License (CC BY) and has been copied from the Kennisland website. For a full version with images, streamers and notes go to https://www.kl.nl/opinie/the-future-shape-of-civic-crowdfunding/